Foraging for burdocks and more

Today I saw some “ramps” in the supermarket. They were $14.99 a pound. Ramps are a small, flavorful wild leek. 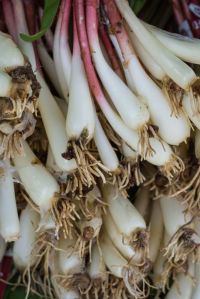 The burdocks are late this year, by nearly three weeks. I suspect that our crazy winter weather had a lot to do with it. No matter what, I will have Jessica cook up a great side dish for me some night this week. I will give you the recipe a bit later.

Foraging for plants was an everyday occurrence a generation ago. It was an important part of nearly every first-generation family’s diet. There were a lot of reasons for its popularity. First of all, many folks who immigrated to our shores were from the poorest parts of the poorest countries in Europe. They were used to leaving the comfort of home and going into the countryside, looking for edible foods. Many of those people grew up with diets that were meatless, or nearly so. They were used to vegetables that they collected in the countryside.

If we look back to the ’20s and ’30s, ordinary folks did not have electric refrigerators or freezers. Does anyone remember the iceman? He is the fellow who visited your home once or twice a week with a couple blocks of ice that he put in the upper compartment of your “ice box.” There were no supermarkets that carried vegetables every month of the year. Freezing had not become a way of life yet. To get your veggies during the winter months, you simply opened a can with very limp spinach, beans or carrots. They were very tasty, too, because of the salt.

We also had to consider the Great Depression. There just was not a lot of money to buy food, so foraging became a necessity. During World War II, rationing — even though it did not include vegetables — made foraging important. But then, we did not call it “foraging.” My mom would tell us she was going out into the countryside to see if there were any good vegetables. And there usually were.

Although we feasted on foraged greens during the spring, there were berries in mid- to late summer and roots during the fall months. In March, we feasted on mustard greens, which were a bit bitter, but healthy and full of iron. Just as the weather tempered in late April or early May, my Mom knew where the brackish water was, where ostrich ferns were waking up from their winter naps. She always came home with an apron full of fiddleheads, the tender part of the plant that would grow into a fern frond. Today, they are a delicacy. In my youth, they were just another vegetable. In May, it was time for burdocks and in June, we feasted on wild strawberries. They were just about a half inch across, but each had much more flavor than those large ones that have been shipped to us for hundreds, even thousands, of miles.

My Mom called burdocks “Italian celery.” Although there are dozens of ways to cook the leaves in summer and the roots in winter, my love is for the tender stems. We cut the most tender ones and took a moment to remove the strings, as we sometimes do with celery. We cut into 1.5-inch lengths and boiled the heck out of them to tenderize. Next, make batter as you would for corn or zucchini fritters. But be sure to add in some Parmesan cheese and basil and/or parsley leaves. Once done, add the burdock stems and drop by the tablespoons into half an inch of hot oil. Cook through, place on layers of paper towels to soak up excess oil, and serve hot. In our house they never seem to get to the dinner table because they are plucked right off the towels.

But before you go running around the countryside getting free food, learn what you can pick, and what’s toxic. Some plants can be very poisonous, like the mayapple, which has a delicious, edible fruit, but other parts of the plant can be toxic. Learn and then enjoy.

This site uses Akismet to reduce spam. Learn how your comment data is processed.